In business (and in life) there are moments when your collaboration story takes a serendipitous turn.

In the mid-1970’s a young product manager, Paul worked at Mettoy – one of the largest toy companies of the time.

Thankfully Paul had 2 great assets at his disposal; a creative mind and … children! Although the latter were somewhat less helpful with paperwork and data handling, they were great at product testing and playing.

Paul was given a new project: To revamp a popular Playcraft staple – the children’s train set.

One iconic brand came to mind; Miffy. Combining simple designs and bright colours, Dick Bruna had created a world of story books and adventures for children to get lost in.

What if, Paul thought, they could bring that imagination to life? 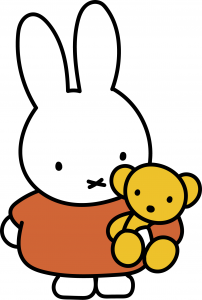 For Miffy, this was their first venture into the toy market, and they were very careful to explain how precious the designs were and how sensitively they would need to be interpreted, especially adapting 3D models of designs that had only existed in 2D, on paper.

Undeterred Paul built a relationship based on trust and empathy, and was invited to Holland to meet Dick Bruna at his studio along the canal in Utrecht. Dick proved to be as charming as you might expect – his friendly face with his big grey moustache made him everyone’s favourite Grandpa! He showed Paul how important it was to combine simplicity with expression. Days would be spent on getting a smile for Miffy just right.

Working alongside an artist, especially when adapting their art becomes an art form in itself. It takes patience and dedication to bring their vision to life in a different way.

“The Miffy launch was a resounding success”

Train sets flew off the shelves and before long there were baby rattles and “Squeeze and Squeak” toys for babies. Miffy had transformed from book character to beloved childhood toy and Paul (and his children) became lifelong Miffy fans.

One child in particular, grew up with all the creativeness and ambition of her father. The attention to detail and vision for beautiful baking birthed Honeywell Biscuit Co. This time, the project brief became biscuits not toys.

This Spring, a childhood memory is reborn, as a new Honeywell generation transform the iconic colours and simple designs of Miffy, from character to artisan biscuit art. 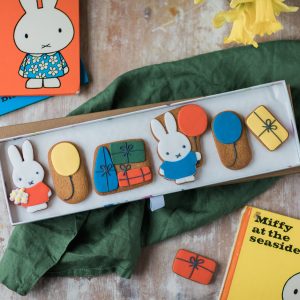 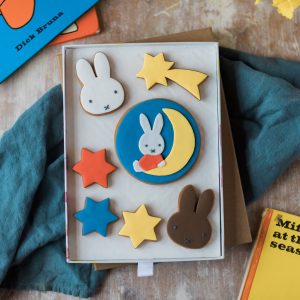 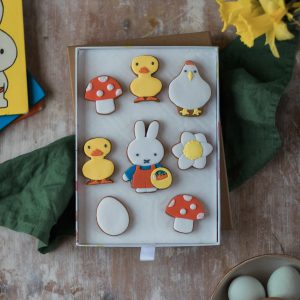 “So now it all turns full circle, with my daughter Rebecca introducing the Miffy range of biscuits – 45 years later! I am looking forward to seeing them – and eating them!” – Paul Honeywell

You can now explore our full Miffy collaboration by clicking on the photos above. Whether it’s a gift for spring time or a dreamy biscuit gift for a friend, we can’t wait to see your families enjoying our newest collaboration as much as we have loved creating them.

This website uses cookies to improve your experience while you navigate through the website. Out of these, the cookies that are categorized as necessary are stored on your browser as they are essential for the working of basic functionalities of the website. We also use third-party cookies that help us analyze and understand how you use this website. These cookies will be stored in your browser only with your consent. You also have the option to opt-out of these cookies. But opting out of some of these cookies may affect your browsing experience.
Necessary Always Enabled
Necessary cookies are absolutely essential for the website to function properly. These cookies ensure basic functionalities and security features of the website, anonymously.
Functional
Functional cookies help to perform certain functionalities like sharing the content of the website on social media platforms, collect feedbacks, and other third-party features.
Performance
Performance cookies are used to understand and analyze the key performance indexes of the website which helps in delivering a better user experience for the visitors.
Analytics
Analytical cookies are used to understand how visitors interact with the website. These cookies help provide information on metrics the number of visitors, bounce rate, traffic source, etc.
Advertisement
Advertisement cookies are used to provide visitors with relevant ads and marketing campaigns. These cookies track visitors across websites and collect information to provide customized ads.
Others
Other uncategorized cookies are those that are being analyzed and have not been classified into a category as yet.
SAVE & ACCEPT
Powered by

Join our newsletter for an instant discount code valid on your first website order.*